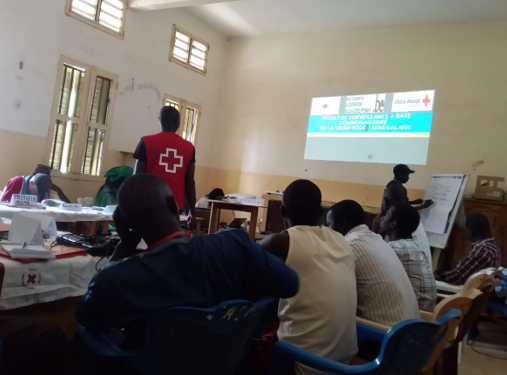 The Senegalese RC (SRC) has implemented CBS in 3 health districts, Fatick, Kaolack and Ziguinchor with support from the Belgian Red Cross and NorCross. This project was started in 2019 as a pilot in both rural and urban settings, using the Nyss software platform to assist with reporting and data management.
‍
Health authorities asked SRC to implement a CBS pilot project which aligned with the national surveillance strategy and would contribute to the surveillance of all WHO notifiable epidemic risks: Viral hemorrhagic fever, bloody diarrhea, neonatal tetanus, poliomyelitis, meningitis, measles, cholera, and yellow fever. COVID-19 was added in March 2020.

In the first weeks of CBS deployment, 5 cases of measles were confirmed and managed early by the health facilities after a SMS was sent by a volunteer. This confirmed the relevance and the efficiency of the CBS mechanism to early detect and response in a region with a very high-level risk for measles outbreak.

The three regions have now asked SRC to maintain CBS in the three districts and scale up to other districts, for a total of 9 health districts covered by CBS. Moving forward CRS will identify lessons learned from the last 3 years of using the CBS mechanism to enable the maintenance of a high quality surveillance. The CRS has had a strong relationship with health authorities throughout this entire project and this will be integral to maintain for continuing success of the CBS in Senegal.
‍
Norwegian Red Cross
IFRC
Contact us for more information
Nyss
GitHub